ONLINE BOOKING
We are happy to provide Dysport injections in the Greater Moncton.

When it comes to Dysport Cosmetic Injections, or any other cosmetic treatment for that matter, experience matters. Choose an injector that is highly skilled and trained in using Botox & Dysport. This ensures the best possible results.

Learn about our services

Which Facial Areas can be Treated with Dysport & Botox?

How much should I expect to pay for Dysport or Botox?

Botox is priced per unit. On average, each unit costs about $10 to $15. If you receive up to 20 units in your forehead, you could be looking at a total of about $200 to $300 for treatment of horizontal forehead lines. We suggest booking a consultation for exact price. EVERYTHING STARTS WITH A CONSULTATION

Ask Us a Question or Request A Consultation!

What’s the difference between Botox and Dysport?

Both Dysport and Botox are FDA approved for treating the area between your eyebrows or glabella, the lines that extend upward or vertically toward the forehead. … Dysport is meant for people who have moderate to severe glabella lines. Botox is approved for treating forehead lines, glabellar lines and crow’s feet.

Which lasts longer Botox or Dysport?

How much does Dysport cost?

The average cost of Dysport ranges between $300 and $400. This depends on your provider as well as how many injections you need.

Which is cheaper Dysport or Botox?

The average cost of neurotoxin injections such as Dysport and Botox can be $400 per session. However, the number of required injections and the area of treatment dictates the exact cost. … Dysport is less expensive than Botox on average.

How much Dysport is needed for forehead?

How many units of Dysport to treat forehead lines? The amount of Dysport needed will vary from person to person. However, we expect patients to receive 40 units in the forehead area.

How often should you get Dysport?

It’s generally recommended to receive this treatment every three to four months, but each person’s results are different. Some may need more or less frequent appointments based on their biological response to treatment.

How quickly does Dysport work?

Although office visits can vary, the procedure generally takes 10 to 20 minutes. How long does it take Dysport to work? Though results vary, over half of users see improvement in moderate to severe frown lines between the brows within 2-3 days.

What is a lip flip?

A lip flip is a nonsurgical cosmetic procedure that can help people achieve a fuller upper lip without dermal filler. The procedure involves Botox injections into your upper lip to relax the muscles and “flip” your lip upward.

Which is stronger Dysport or Botox?

Dysport is more diluted than Botox. The difference in concentration typically occurs because Dysport uses smaller protein molecules to induce muscle relaxation. These smaller proteins are less likely to be broken down by antibodies, making the results of Dysport injections quite desirable for patients. "Everyone that I've had a chance to meet at Sparkle have been very helpful. Alexandra was amazing and I really feel that I have the right products and plan to have clearer skin. Looking froward to it. I also didn't feel pressured in buying a bunch of products and have a good understand of what each product will do to help."

"Everyone was very polite and knowledgeable. There was no pressure to buy products. I was surprised with my consultation fee waived when I did buy products, there are monthly giveaways and it's always nice to feel like a company gives back. I felt unrushed during my consultation and that none of my questions were silly."

"The staff is so friendly and knowledgeable and the services are amazing. I'll admit I can be particular and sometimes hard to please but at Sparkle I've always been happy with my services because the staff always take the time to make you feel comfortable and informed. I can't say enough about this place!! It's also a beautiful atmosphere." 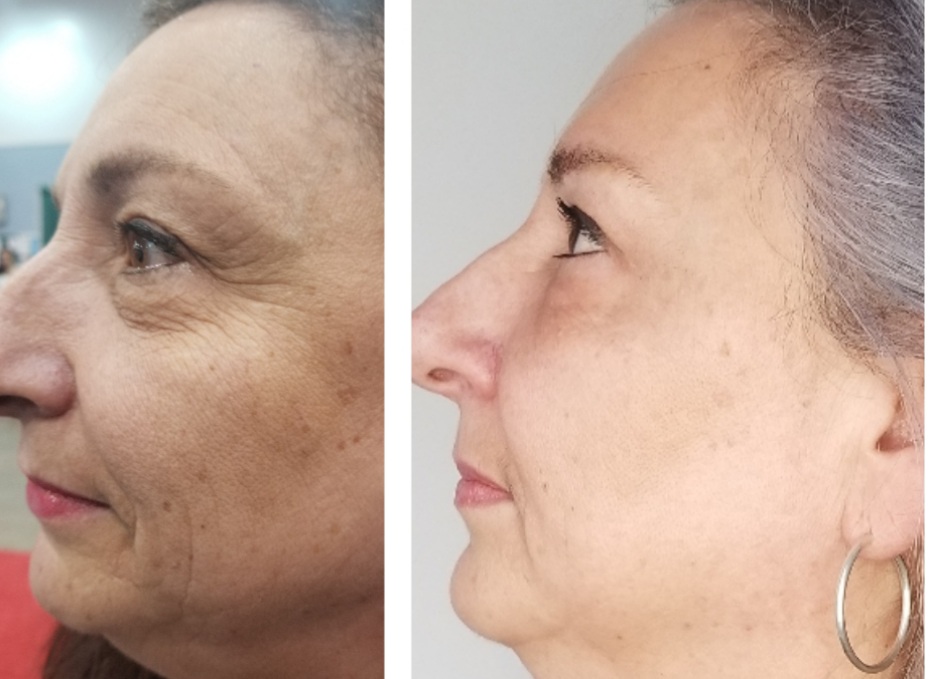 How to Submit pictures

Taking a good picture for a proper diagnosis

In order for the Hair Loss Solutions team to properly assess your hair loss degree, you will need to submit pictures of your scalp. See below instructions on how to properly take good photos.

This photo should cover the circled area showing the hairline from the front of your head. Your head should be slightly tilted forward. If you have long hair it is advisable to centre part it then tuck it behind your ears or clip each side back for the photo so that your hairline and temple areas are clearly visible. Both sides of the head

Please take a photo of each side of your head concentrating on clearly showing the area from your hairline and temples to your ears, as circled in these diagrams. If your hair is long enough then please centre part it and either tuck it behind your ears or clip it back so that the required areas, and any other areas on the sides of your head where there is hair loss, are clearly visible.

This photo should cover the circled area of the back of the head concentrating on clearly showing the crown area of the scalp. If you have hair loss below the crown area then please do ensure this area is clearly pictured too.Again, if your hair is long enough, it can be helpful to centre part your hair before taking this photo

This photo should cover the circled area and clearly show the top of your scalp from above. If you have long-enough hair it is advisable to comb or brush it into a centre-parting before taking the picture.

If you prefer, you can DWL the PDF version of this questionnaire and send it back to us via email at [email protected]